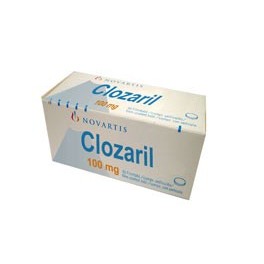 Clozaril (clozapine) is a neuroleptic drug with sedative effect. Clozapine has a strong anticholinergic, antiadrenergic, antihistamine, antipsychotic effect. It demonstrates a pronounced and rapid sedation in patients with schizophrenia.

In what case you should not use Clozaril (clozapine)

How to take the drug

Clozaril (clozapine) in the form of tablets can be taken regardless of the meal. The initial single dose is 50-100 mg, the multiplicity of reception - 2-3 times a day. The daily dose may be increased to 200-600 mg if necessary. The highest dose is 600 mg per day.

Patients with renal, liver, heart disease and cerebrovascular disorders should use the drug in small doses - from 25 to 200 mg per day.

Maintenance therapy: take clozapine in the evening at a dose of 25-200 mg.

What side effects may occur while using the drug?

Drugs which depress the nervous system may increase the severity of side effects and cause respiratory depression.

Clozaril should be combined with caution with antihypertensive agents, digoxin, phenytoin, and carbamazepine (these agents may cause severe pancytopenia and neuroleptic malignant syndrome).

Caffeine, paroxetine, fluoxetine, sertraline, fluvoxamine, ciprofloxacin and clozapine may increase the risk of side effects.

Concomitant administration with warfarin may be associated with severe adverse medical reactions.

Rifampicin inhibits the metabolism of clozapine.

Patients should consult a doctor before they start using the drug and in cases of atypical symptoms. Your doctor should advise you not to drive during therapy.

Store in a cool, dry place, inaccessible to children.

Already have an account? Log in now
August 10, 2015
Clozaril really helps but I have found out that it is not for everyone, at least after some time. I’ve never had to take it (thanks god) but my older brother has… my family have noticed that he’s strange since he was a little boy but at the age of 15 he was diagnosed with schizophrenia. Since the day he was diagnosed he has been taking very and very much medicines but with very and very little success. We have found out about this medicine when he was in his early thirty’s, it was very hard for him and for us as his family to fight with this disease for more than 15 years until he was given clozaril, after that everything changed. He has been on this medicine for many years and all this time he was finally able to live an almost normal life until he was in his mid forty’s. in about 3 days his condition dropped down from normal to living hell once again due to his blood test results he has got. Obviously, after so many years with so good results we have done everything to get him back on clozaril, however, because of the special list with some people who are having strange reactions to it aren’t supposed to use the medicine ever again. however, my brother is among the lucky people (in some way) because he’s having such a supportive family trying to encourage and to support him with everything he needs in order to make him live the best life he can have. I really don’t know what to say, unfortunately or with some luck… but he is now living in an adult facility which is taking care of whatever he needs and those people are always making sure that he is getting his medicines and once again… everything he needs. Of course I’m very sorry for him but once he’s suffering from schizophrenia then I really think that he’s one lucky man… I’ve done my research and I know that there are people suffering from schizophrenia who are not getting absolutely any help and their condition is a lot worse than my brother’s. besides, I know that there are a lot of families (parents) who have refused of taking care of their children suffering from this terrible condition. I’m just sorry that he wasn’t able to take further this drug. If it helps you or your relatives then enjoy this time.