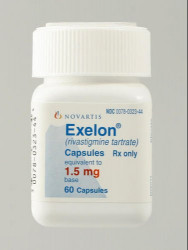 Exelon (rivastigmine) is a drug used to treat Alzheimer's disease, as well as dementia in Parkinson's disease. One way to save money on the Exelon (rivastigmine) retail cost regardless of income and insurance status is to use Exelon coupons or discount cards from RXCoupons. Use our Rivastigmine coupons at your online pharmacy and receive up to 75% off the sale price each time you refill your prescription.

Exelon is contraindicated in case of hypersensitivity to the active or additional components of the drug. It is not used in patients under the age of 18 years, as well as in those with severe hepatic dysfunction.

How to use Exelon (rivastigmine)

The drug is recommended for use during lactation only if there is a strong indication.

Start the treatment with a dose of 1.5 mg 2 times a day, and then gradually increase to the maintenance dose. If treatment is interrupted for more than three days, start the therapy with the minimum daily dose (to reduce the risk of adverse events).

Disorders of the digestive system (such as nausea, vomiting and diarrhea) may occur at the beginning of treatment. Treatment should be discontinued in case of signs of dehydration due to prolonged diarrhea or vomiting.

It is necessary to control body weight in Alzheimer's patients, since these patients may lose weight while taking cholinesterase inhibitors, including rivastigmine. Patients weighing less than 50 kg should take Exelon with caution.

As with other cholinomimetics, rivastigmine may lead to urinary tract obstruction, as well as extrapyramidal disorders (particularly tremor). These symptoms may disappear at lower doses. Otherwise, the therapy should be canceled.

The drug should be stored in a dry place, at room temperature, for no longer than 36 months.