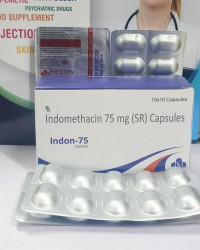 Indocin is a non-steroidal anti-inflammatory drug with analgesic, antipyretic action. One way to save money on the Indocin SR (indomethacin) retail cost regardless of income and insurance status is to use Indocin SR coupons or discount cards from RXCoupons. Use our Indomethacin coupons at your online pharmacy and receive up to 75% off the sale price each time you refill your prescription.

Indocin SR (indomethacin) is a synthetic drug with anti-inflammatory, analgesic, antipyretic, anti-rheumatic effect. It is used to treat rheumatoid arthritis, osteoporosis, spondylitis, rheumatism, arthritis, inflammation and swelling in the area of broken bones.

Indocin SR is an active anti-inflammatory agent for rheumatoid arthritis (characterized by chronic progressive inflammation of the joints), spondylitis (disease of the spine), osteoarthritis (disease of the joints), inflammatory diseases of the connective tissue and musculoskeletal system, thrombophlebitis (inflammation in the veins) and other diseases.

Take Indocin SR capsules during or after meals, with milk. The initial dose for adults is of 25 mg 2-3 times a day or 75 mg 1-2 times per day. Patients may increase the dose to 50 mg 3 times a day (if necessary). The maximum daily dose is 200 mg. The treatment should be continued for 4 weeks (the same or reduced dose). The maximum daily dose of indomethacin for long-term treatment is 75 mg.

Learn about Indocin SR side effects

It is necessary to monitor liver function during treatment with indomethacin.

Patients should use antacid drugs to prevent and reduce dyspeptic symptoms.

Patients must be careful when driving during treatment with indomethacin.

Indomethacin may increase the concentration of digoxin and methotrexate, which can lead to increased toxicity of these drugs.

Combined therapy with paracetamol may result in high risk of nephrotoxic effects.

Combined therapy with ethanol, colchicine, corticosteroids and corticotropin may increase the risk of bleeding in the gastrointestinal tract.

Indomethacin reduces the effect of diuretics, uricosuric and antihypertensive drugs (including beta-blockers). It strengthens the side effects of corticosteroids, estrogens, other NSAIDs.

Cyclosporine may increase the nephrotoxicity of indomethacin.

Cefamandole, ceftazidime, valproic acid may increase the risk of bleeding and hypoprothrombinemia.

Antacids and cholestyramine may reduce the absorption of the drug.