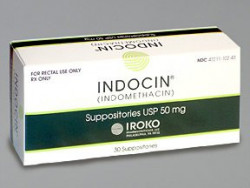 Indocin is a non-steroidal anti-inflammatory drug with analgesic, antipyretic action. One way to save money on the Indocin (indomethacin) retail cost regardless of income and insurance status is to use Indocin coupons or discount cards from RXCoupons. Use our Indomethacin coupons at your online pharmacy and receive up to 75% off the sale price each time you refill your prescription.

When should you use Indocin (indomethacin)?

Indocin is a non-steroidal anti-inflammatory drug with analgesic, antipyretic action.

What should you know about Indocin (indomethacin) contraindications?

Indomethacin is contraindicated in patients with erosive and ulcerative lesions of the gastrointestinal tract (GIT), hypocoagulation and other violations of hematopoiesis, hypersensitivity to the drug. The drug is not used during pregnancy and breastfeeding, in patients up to 14 years of age. It is prohibited in patients with the following diseases: aspirin-related respiratory disease, severe hepatic dysfunction or kidney problems, severe congestive heart failure, severe hypertension, pancreatitis.

Use with caution in patients with diseases of the gastrointestinal tract, kidney, liver, epilepsy, heart failure, hypertension, Parkinsonism, in elderly patients.

The dose is prescribed by the attending physician based on clinical indications and patient's condition. Indocin tablets are taken after meals. The initial adult dose is 25 mg 2-3 times a day for 4 weeks. The dose may be increased to 50 mg three times a day. The maximum daily dose is 200 mg (not more than 75 mg in long-term treatment). Do not exceed the recommended dose.

What should you know about Indocin (indomethacin) side effects?

Indocin therapy can cause unwanted side effects.

The drug should be used with caution in case of dyspeptic symptoms. It is not recommended to mix Indocin with acetylsalicylic acid and other NSAIDs. Patients should systematically monitor liver and kidney function.

The drug is contraindicated in patients with liver cirrhosis and hepatic failure.

The drug is contraindicated in patients with chronic renal failure.

Indocin (indomethacin) interaction with other drugs

The drug reduces the effects of uricosuric, antihypertensive and diuretic agents. It enhances the effect of antiplatelet agents, anticoagulants, fibrinolytics.

Indocin increases the toxic effect of zidovudine. Simultaneous administration of probenecid may increase the concentration of indomethacin in the blood.

Corticosteroids, diflunisal, ethanol may increase the risks of gastrointestinal complications and bleeding.

Acetaminophen, cyclosporine may increase the nephrotoxic effect of indomethacin.

Cefoperazone, cefamandole, valproic acid may increase the risk of bleeding.