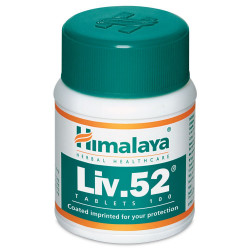 LIV 52 is a combined phytopreparation with hepatoprotective and choleretic effect. One way to save money on the LIV 52 retail cost regardless of income and insurance status is to use LIV 52 coupons or discount cards from RXCoupons. Use this LIV 52 coupon at this online pharmacy and receive up to 75% off the sale price.

LIV 52 is a combined phytopreparation with hepatoprotective and choleretic effect. The drug has anti-toxic, anti-inflammatory, anti-oxidant and mild diuretic action. It works by improving the process of digestion and assimilation of digested food. The drug promotes the regeneration of liver cells, reduces the impact of toxins on liver cells and eliminates the symptoms of biliary tract dyskinesia. LIV 52 improves appetite and normalizes digestion.

LIV 52 is also effective as a prophylactic agent for therapy with antibiotics, sulfonamides and chemotherapeutic agents, as well as after radiotherapy and postoperative period.

The drug is used in the treatment of eating disorders and anorexia (in children with low body weight).

How LIV 52 needs to be administered

Anorexia: Children from 6 years: 1 tablet 3 times a day. Adults: 2 tablets 3 times a day. Duration of treatment - 2 weeks. The therapy can be continued after a 2-week break (if necessary).

LIV 52 as a hepatoprotective agent during anti-TB therapy or with other hepatotoxic drugs (including prevention of anorexia during radiotherapy and chemotherapy):

LIV 52 is taken with other anti-TB drugs and chemotherapy drugs. Treatment duration corresponds to the duration of chemotherapy.

What side effects are possible with LIV 52?

The drug is well tolerated in the majority of cases.

There may be allergic reactions, dyspeptic disorders of the gastrointestinal tract (in the case of individual sensitivity to one or more components of the drug).

When LIV 52 is contraindicated

Do NOT take LIV 52 in case of hypersensitivity to one or more components of the drug, pregnancy, lactation.

Information for pregnant and breastfeeding women

The drug is contraindicated during pregnancy and lactation.

LIV 52 may reduce the concentration of ibuprofen. The drug reduces the bioavailability of tetracycline and doxycycline.

Warnings and precautions for LIV 52

LIV 52 drops do not contain alcohol. The drug can be used for administration in children from 2 years of age.

The drug is prescribed with caution in patients with acute gastrointestinal disease.

Keep out of the reach of children.