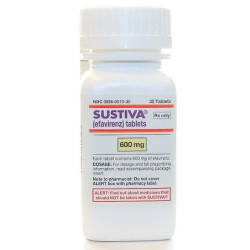 Sustiva (efavirenz) is an antiviral synthetic drug that demonstrates activity against HIV. One way to save money on the Sustiva retail cost regardless of income and insurance status is to use Sustiva coupons or discount cards from RXCoupons. Use this Efavirenz coupon at this online pharmacy and receive up to 75% off the sale price.

What should I know about Sustiva?

Sustiva (efavirenz) is an antiviral synthetic drug that demonstrates activity against HIV.

It is important to know that Sustiva is used with caution in the following cases: - Psychiatric disorders in patients; - Liver disease (mild and moderate severity); - Convulsions; - Combination therapy with certain anticonvulsant drugs, such as phenobarbital, phenytoin and carbamazepine.

How should you use Sustiva?

Sustiva capsules should be taken at bedtime and on an empty stomach (food may increase the frequency of side effects). Sustiva is used in combination with other antiretroviral agents.

Learn about Sustiva side effects

What should you know about Sustiva precautions?

Sustiva should not be used as monotherapy for HIV infection. It is not recommended to use Sustiva simultaneously with certain drugs (in a tablet form) with fixed-dose combinations of emtricitabine, efavirenz, tenofovir disoproxil fumarate.

Sustiva can cause certain side effects, including insomnia and dizziness (it is recommended to refrain from driving in case of severe side effects).

What should you know about Sustiva interactions?

Do not use Sustiva with the following drugs: astemizole, midazolam, bepridil, terfenadine, cisapride, ergot alkaloids. Such combinations can lead to serious and even life-threatening consequences.

Do not take drugs or products containing St. John's Wort, as they can significantly reduce efavirenz concentrations.

Ritonavir used in low doses may increase the incidence of adverse events associated with efavirenz therapy.

Efavirenz reduces the concentration of clarithromycin (it is recommended to use another antibiotic).

Rifampicin reduces the concentration of efavirenz.

Caution should be exercised when using valproic acid (patients should be under medical supervision to control convulsive seizures).

Sustiva reduces the effectiveness of hormonal contraceptives. Patients should be under close medical supervision if they use methadone.