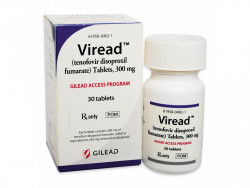 Viread (tenofovir disoproxil) is a drug that is used as part of antiretroviral therapy. One way to save money on the Viread retail cost regardless of income and insurance status is to use Viread coupons or discount cards from RXCoupons. Use this Tenofovir Disoproxil coupon at this online pharmacy and receive up to 75% off the sale price.

Viread (tenofovir disoproxil) is a drug that is used as part of antiretroviral therapy. Viread is an antiviral drug that is active against HIV.

Do not use Viread in case of hypersensitivity to tenofovir and other components of the drug. The drug is not recommended for children up to 18 years of age. Patients on hemodialysis should not take Viread.

The drug should be used during pregnancy only if the expected benefit for the mother exceeds the potential risk to her child. It is not recommended to breastfeed in order to prevent the risk of postnatal HIV transmission.

Take 1 tablet during a meal or with a small amount of food.

Elderly patients should use lower doses (high risk of violations of the liver, kidney or heart).

Patients with mild renal impairment can safely take Viread once a day (there is no need to adjust the dose).

Liver and bile ducts: rarely - hyperbilirubinemia, hepatitis (both during treatment and after discontinuation).

Viread should not be used concomitantly with other preparations containing tenofovir.

Didanosine will increase the risk of side effects (such as pancreatitis, lactic acidosis). Combination therapy with didanosine is not recommended.

Tenofovir should not be used concomitantly with adefovir (these drugs have almost identical antiviral effect).

Ritonavir can increase the concentration of tenofovir.

Tenofovir is mainly excreted through the kidneys. Drugs that reduce renal function may lead to an increase in the concentration of tenofovir, as well as increase the concentration of other drugs excreted by the kidneys. It is necessary to avoid using tenofovir simultaneously with nephrotoxic drugs such as aminoglycosides, pentamidine, vancomycin, amphotericin B, foscarnet, tacrolimus, cidofovir.

Ganciclovir, valganciclovir, cidofovir and darunavir may lead to increased concentrations of tenofovir.

Patients should be informed that Viread therapy does not prevent the risk of HIV transmission to other people.

Tenofovir should not be used concomitantly with drugs that contain tenofovir or adefovir. It is not recommended to take tenofovir and didanosine.

The risk of hepatotoxic effect is higher in patients infected simultaneously with HIV and hepatitis B or C virus. Therefore, such patients should be monitored carefully.