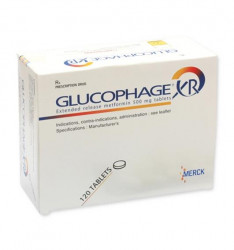 Glucophage XR is an innovative form of metformin (extended-release tablets), which can effectively control blood sugar levels during the day. One way to save money on the Glucophage XR (metformin) retail cost regardless of income and insurance status is to use Glucophage XR coupons or discount cards from RXCoupons. Use our Metformin coupons at your online pharmacy and receive up to 75% off the sale price each time you refill your prescription.

Glucophage XR is an innovative form of metformin (extended-release tablets), which can effectively control blood sugar levels during the day. This form of the drug can be taken once a day. Glucophage XR provides better tolerance in different parts of the GI tract in comparison with Glucophage.

This drug does not stimulate insulin secretion and does not cause hypoglycemia. It reduces hepatic glucose production and helps delay intestinal glucose absorption.

Metformin stimulates glycogen synthesis and increases the total capacity of all types of glucose transporters.

Food does not affect absorption of metformin in Glucophage XR.

How to use Glucophage XR

The tablets (500 mg) are swallowed whole, without chewing, with a small amount of water.

Dose titration: depending on glucose content - the dose is slowly increased by 500 mg every 10-15 days. The maximum daily dose of the drug is 2 g (4 tab.) once daily during dinner.

If you take Glucophage XR with insulin, the usual initial dose is 500 mg once daily.

Elderly patients and patients with reduced renal function should slightly reduce the dose.

Glucophage XR should not be used in children and adolescents under 18 years of age.

Unwanted adverse effects of Glucophage XR therapy may include: Nervous system: often - disorders of taste (metallic taste in the mouth); Digestive system: very often - nausea, vomiting, diarrhea, abdominal pain, lack of appetite. These effects may occur during the initial treatment period. To prevent symptoms, it is recommended to take metformin during or after a meal or divide the daily dose into 2 doses. Skin disorders: very rarely - erythema, pruritus, urticaria. Metabolism: rarely - lactic acidosis. Chronic administration of metformin may result in low absorption of vitamin B12 and megaloblastic anemia (in rare cases). Early symptoms of lactic acidosis include nausea, vomiting, diarrhea, high body temperature, abdominal pain, pain in the muscles, shortness of breath, dizziness, impaired consciousness and coma. Hepatobiliary system: there are few reports about hepatitis. Adverse events disappear completely after discontinuation of metformin therapy. If dyspeptic symptoms do not disappear, metformin treatment should be discontinued.

When Glucophage XR is contraindicated

Elderly patients should be particularly careful when using Glucophage XR with antihypertensive drugs, diuretics or NSAIDs. Patients of all age groups should refrain from drinking alcohol during treatment.

Glucophage XR monotherapy does not cause hypoglycemia. However, patients should be warned of the risk of hypoglycemia when combining metformin with other hypoglycemic drugs.