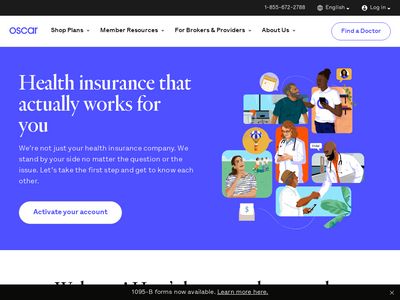 Unlike other sites that I have reviewed, Hioscar it is not an online pharmacy, however it is an online health insurance company which claims to aim on providing good and affordable health insurance plans (planning your health and planning your insurance) to all of their customers. I could find that this site is being based in the USA and as much as they say – they are offering a big variety of health services at some ‘affordable costs’ (having ‘very low prices’, as they say). As much as I have seen, they seem to have their own doctors and their own hospitals.

What drugs do they have there?

I’ve started my investigation and I saw that they are having different features on that site. The first one is the health plan selection. They are offering different health plans as per the requirement of each of their customers. I’ve checked it a bit closely and they seem to have doctors visits that are for free, they even have generic drugs that are approved by FDA which their health insurance plans can cover. Their plans seems to cover fully some medications but they don’t have all medications out there and I know because from the research I’ve done – they won’t cover Viagra of any type, but they do cover Cialis.

However they have branded drugs and special visits, those drugs do require to be paid, however they claim to be very low and 100% affordable. They also claim that in some cases, when the customers are paying out of their pocket, then the company is going to provide a back up support, but that’s not in all cases. I’ve tried to sign up and I did, meaning that you can register for free, but of course for getting insurance you need to pay.

So what are the prices then?

As stated, in case you do pay for getting your insurance plan, then they are paying for your medications but here’s what info they shared on their site: After you hit your $4,000 deductible then Oscar start spilling the bills with you. This means that you’re going to get anything for free when you would buy some medications that you would find only in their drugstore (and there’s by far not everyone) under $4000. However they have one more claim: After you hit your $7,150 out of pocket max they are going to fully cover everything! This means that if you reach to pay 7,150 USD out of your pocket in a year, everything rest in that year they are going to cover 100%.

You can reach them by calling 1 – 855 – 672 – 2788. They don’t seem to have live chat function. But, they claim that as soon as you take your health care plan, you are going to be allowed to access a lot of doctors and physicians in your area, but they seem to operate ONLY in the following US states: New York, New Jersey, Cleveland, Nashville, Austin, San Antonio, LA and OC, San Francisco. If you live in another country or another state, their insurance seem not to work for you. I found that they have mobile apps too where you are able to reach doctors and health plans in your location.

So if I accept it, do they give me some special offers, or discounts, or maybe coupons?

They don’t seem to have any special offers or anything in this matter. there doesn’t seem to be any coupon codes available and I couldn’t find any discounts on any health care plans. There is a site which claims to offer coupons for hioscar.com, but based on the site ‘popularity’ and rates, I doubt that those coupons would do anything good.

It does seem so. I can’t say anything from experience as I have never ordered anything here, never made a purchase and never had insurance from them. But based on everything else it seems to be legit so I doubt that it would scam you when you pay the money. However, as with any other insurance company, I suggest you to be careful.

If I never insured here, what about those who did? Hioscar Reviews

I found few reviews on other sites online. I’ve literally found like 10 reviews or so. anyhow, although most of them were positive, there were also negative ones. One positive review stated: * Oscar made sure I was taken care of.* however the other negative review stated that it is the most horrible insurance company. As he said the reason is that he paid and was waiting for appointment next day, but instead the appointment the Oscar said that the bill was not paid. And as the person said: Oscar company is the worst insurance that I ever had. So there are people being happy with this insurance company while others saying that it is the worst.

What’s the conclusion after all of this?

Hioscar.com is an online insurance company that is giving healthcare plans for their customers and that’s only in certain states of USA. In addition to that it covers only 4000 dollars after that you need to pay out of pocket and only if you reached 7200 USD per Year they would fully cover you. another thing is that they have very little medications, like for example they don’t have Viagra which is very important at least for me. My friend is ADHD and I checked for Adderall which they don’t have either. In short there are few medications found in their store as much as it seems. Plus there are overall few reviews online about it and many of them are negative. All of this makes me conclude that this online insurance company hioscar.com isn’t worth more than 3 out of 5 rate.

There are no user reviews for this listing.
Please login or register to write a review.